Live at the Glenn Miller Café 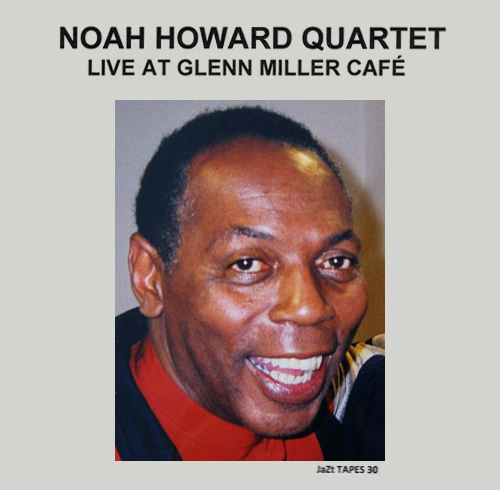 All compositions by Noah Howard.

More than a typical nightclub set, the untitled tracks that make up this passionate and high-quality performance from 2000 also serve as an inadvertent retrospective of saxophonist Noah Howard’s long career. The New Orleans-born Howard (Apr. 6th, 1943- Sep. 3rd, 2010) was a second wave New Thing player, who moved to Europe in the early ‘70s, initially working with fellow expatriates like saxophonist Frank Wright and pianist Bobby Few and then, following his move to Belgium in the early ‘80s, after time in Africa, gigging with jazzers from everywhere. His collaborators included Europeans such as Dutch drummer Han Bennink and French pianist François Tusques plus South African bassist Johnny Dyani.
Live at Glenn Miller Café picks up on most of the musical currents Howard always brought to a performance. Especially on the first, third and final tracks, playing tenor saxophone, Howard spins out series of choruses, in an extended Trane-like mode but leavened with a blues overlay and some heartfelt Crescent City soul. Few is even more dazzling here, providing McCoy Tyner-like modal expression where needed, yet elsewhere chording like a funky combination of Wynton Kelly and Ray Charles. Furthermore, when Howard switches to a balladic mode, the pianist manages to mate blues tonality and traditional romanticism in response.
Howard’s internalization of African sounds is expressed on a couple of later tracks. Here the measured backbeat of Cape Town-born, Swedishresident drummer Gilbert Matthews predominates, mixed with Few’s gospelish runs. But the performances are hardly conventional. Capable journeyman bassist Ulf Åkerhjelm interrupts the most extended variants with some faux-baroque bowed basslines while the alto saxophone solo evolves from a theme statement of bugle-like cadences to splayed and pressurized multiphonics.
Howard never lost the populism that kept him working steadily until his death from a cerebral hemorrhage and he amply demonstrates it here. One track is a close cousin to “Work Song”, albeit deconstructed with some reed snarls, Few contributing boogie-woogie licks plus a shuffle beat from Matthews. The leader even adds some revival singing of “We Come from the Mountain” as he introduces the band. This CD captures Howard in the prime of his life and is a fitting memorial for a jazz survivor.

In conversation this writer had with Dutch pianist Misha Mengelberg, the idea was put forth that, aesthetically and conceptually, Thelonious Monk’s music is from the mind of an “architect” while Herbie Nichols’ is from that of a “painter”. Monk and Nichols have both been favorites of Mengelberg in terms of interpretation; by comparison, the pieces of the former are painstakingly constructed albeit whimsical in their relationships while the latter’s work is brushy and gestural – Alexander Calder versus Willem de Kooning.
A fellow linchpin of European improvisation, German pianist Alexander von Schlippenbach, who turns 75 this month, has brought Monk’s music into expressive play for decades, whether as a soloist, with a trio or in the context of the Globe Unity Orchestra. The apex of Schlippenbach’s engagement was Monk’s Casino, a setting for the pianist and the quartet Die Enttäuschung (Rudi Mahall, bass clarinet; Axel Dörner, trumpet; Jan Roder, bass; Uli Jennsen, drums) released on Intakt in 2005. That set tore through the composer’s entire songbook across three CDs. On a smaller scale, Schlippenbach revisits Monk solo with Schlippenbach Plays Monk, combining 8 revered tunes with 12 short and spiky linking improvisations.
Early on associated with the quintet of trumpeter Manfred Schoof, in which his pianistic style was reminiscent of early Cecil Taylor (and like Taylor, somewhat of an outgrowth of Horace Silver), Schlippenbach’s work became either extraordinarily ‘free’ or archly composed. So it is natural that, in a sense, he interprets Monk in terms of both what is on the page and in feelings that emerge when engaging Monk-ian architecture – ie, responding to Monk’s ‘meaning’. To bring it all back home, Schlippenbach moves through both the structural and expressively gestured realms, operating on levels befitting both Nichols and Monk (to use Mengelberg’s bifurcated notions).
He is haunting and stately, hanging in the air on “Reflections”, where he develops interleaved eddylike cells and languid, shining whirls that are somehow both personal and dauntingly massive. Two interludes follow, brief and compressed flourishes that serve to summarize and open a space for the ensuing “Brilliant Corners”, at once pompous and hilariously microcellular and interesting to hear disassociated from the penultimate blatting saxophones of Sonny Rollins and Ernie Henry. “Pannonica” is lushly superimposed, creeping and motivic, yet as much a letter of gratitude to the piano as the Baroness de Koenigswarter herself. Rarely is Monk’s music interpreted so personally as to rival the ingenuity of the original.

German saxophonist Silke Eberhard has been a rising star of the Berlin scene for a while now. As well as leading her own bands she has been involved in two notable repertory projects: leading an unconventional two-reed, two-brass ensemble through the complete works of Eric Dolphy on Potsa Lotsa (Jazzwerkstatt, 2009-10) and reinvigorating Ornette Coleman’s oeuvre in conjunction with Japanese pianist Aki Takase on Anthology (Intakt, 2006). Eberhard shows a continued affinity for small groupings, manifest in a duet with American pianist Dave Burrell, as well as the brace of twosomes here that emphasize different facets of her craft.
On Singen Sollst Du…, the German goes head to head with up-and-coming Swiss drummer Alex Huber across a set of 13 short extemporizations. Even from the first, where Huber’s annunciatory tattoo rattles as if he has chains draped across his drumheads, there is a clear sense of exploratory zeal. Eberhard demonstrates her credentials as an accomplished free jazz saxophonist, deploying a litany of fraying overtones, vocalized inflections, gruff honks and overblown shrieks to magnificent effect. Lest that seems too daunting, she also reveals a sweeter aspect in the conversational “Song ß” and the honeyed solo “Nach dir”. Huber deals in non-metric cadences, in which roiling tumult alternates with tappy clatter. Excepting an unaccompanied outing by each, both create excitement through energetic interplay and astute timbral exchange. If anyone leads it is Eberhard as she brings to bear her seasoned imagination and great instrumental prowess. Most cuts linger in a single mood, though “Alpinechant” bucks the trend by going from keening to mellow over its six-minute span. Programmed to showcase contrasts in both tempo and dynamics, the album convinces as one of the saxophonist’s best to date.
On Peanuts & Vanities, Eberhard accentuates her lyrical side in the company of veteran East Berlin pianist Ulrich Gumpert during a program of 15 cuts, only two of which approach the six-minute barrier. They combine in a mercurial duet, instant composing in the truest sense, calling on a shared rhythmic and melodic ethos. For the most part the saxophonist maintains a pure-toned breathiness, at times evoking the coolness of Lee Konitz in her tart flowing lines, governed by their own internal logic. For Gumpert, freedom is something that allows rather than excludes and he incorporates elements from both Monk and Ellington into his unfettered palette, toying with both meter and harmony. Even when Eberhard invokes dissonance and aggression, Gumpert draws her back towards the tradition through his response. Elsewhere the pair move hand in glove through gauzy atmospherics, an abstract ballad and even touch on a distorted bebop feel courtesy of Eberhard’s Dolphyesque intervallic leaps on alto. But even this doesn’t explain the “peanut” iconography, which interpolates two renditions of Dizzy Gillespie’s whimsical “Salt Peanuts” and then finishes the set with the only other song title referencing peanuts in a straight reading of the sentimental “The Peanut Vendor”.