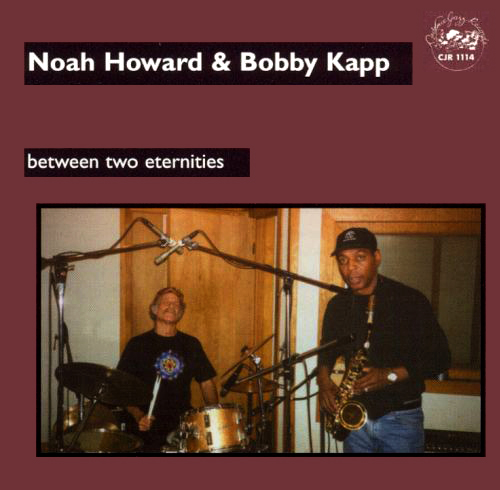 As this millenium is closing, and we head off into the 21st century, this recording is a statement of two musicians creating in harmony in the pursuit and shaping of the next century. For it is the inalienable right of man to discover and challenge oneself and to push the frontiers and boundaries into shaping new terrains; that’s what keeps the human race evolving.

After 30 years of separation, Bobby and I met again through t he internet.The technological advances of the last 10 years have made world citizens able to communicate instantly, openly, and more freely, which is also one of the underlying principels of this music since the ’60s. In this improvisational music, we have been striving to get to what I call “the core communication center of the human soul, direct and pure.”

After extensive e-mailing, we agreed to meet in Gotham City as soon as we would both be there.The fact that Bobby is currently living in a 465 year old artist colony, San Miguel De Allende, Mexico, and I’m living in Brussels, the European Capitalof Europe, however, did not make this the easiest task. But we made it in October’99. When we both arrived and met in the City, it was one of those moments when I felt as if real time had stopped and we were in a spiritual time zone ready for creation. It’s like we say in New Orleans,”if you have all the ingredients and you know what you’re doing, the File Gumbo is: Si BON CHERIE.”

The music you will hear on the CD is a natural flow of ideas and exchanges of codified information that has been a guiding force in our lives for over 30 years.

During that time I worked with a lot of drummers, such as Kenny Clarke, Art Taylor, Oliver Johnson, Mohammed Ali, Rashied Ali, Sunny Murray, Steve Mc Call, to mention but a few of the greatest. Bobby is one of those master drummers who follows the creative improvisational tradition. As for me, I am a transmitter, conveying these 2 1 st century sounds on this CD to you. Sit back, listen, and be transported into the next century.

We would like to thank all the people in our lives, both past and present who have supported us in this music, to bring about a change and a better world.

Welcome to the 21st century.

Being in the center of the creative process again with Noah was the way I wanted io end my century. I also have played with some great ones: Dexter Gordon, Marion Brown, Pharoah Sanders, and so I know how alive I feel when I’m around the legendary Noah Howard, who to me expresses in his life and music the words of the great masteryardbird Charlie Parker: “if you don’t live it, it won’t come out of your horn.”

For listeners interested in reading about the worldwide creative improvised music scene, Cadence Magazine (a division of CADNOR LTD.) is recommended reading.
www.cadencebuilding.com