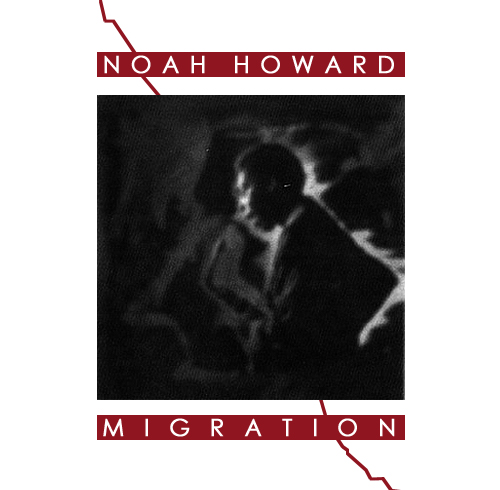 Migration – The title song of the album was originally conceived in Kenya. The composition relies on a very hypnotic, repetitive African rhythm, which is part of what Noah Howard absorbed while living in Africa. There is a tightness and definite rhythmic interplay with the free and overflowing melodic structure on saxophone.

African Man – An African funk track and a celebration of meeting African men. On a political level it talks of great African men like Tutu, Mandela and Kuti, but it also speaks of the african men as a rhythm man, the roots of all modern music.

Cousin Gerri is dedicated to my cousin whom I grew up with and who was very much like a sister. The emphasis is on the saxophone with a very laid back reggae type feeling. Catch up – is more of a simple jazz hit, directed towards the climate of the late 80′s and the 90′s. Compositionally the song is based upon a subtle click, an interplay between sax and piano, always returning to the theme which is very melodic and rhytmic with a funk beat.

The lady – was inspired by Noah Howard’s deep respect, love and sensitivity towards women. It was written as a samba to reflect the hypnotic and sensual feeling of how he sees a woman, “the way she looks, the way she feels, the way she projects herself”, from an artist’s and a man’s point of view. The song has a feeling of oneness and wholeness about it; it’s very smooth and very flowing.

Music in my soul – is a song reaching out with saxophone and vocals to the feeling of the times. Orchestration and background vocals are with a soul reggae feeling. Nairobi – a hypnotic soprano saxophone line dancing on a romantic Nairobi feeling. Nobody knows – a blues featuring Noah Howard on vocals – straith ahead – we all groove on the blues.

Amazing grace – an old English, Protestant spiritual, but for Noah Howard, a sense of returning back, as he grew up in New Orleans, influenced by a Black American church, his grandfather being a minister. The way she walks – is a modern fun!( rhythm and a track for dancers and lovers.

Rising rays of the sun – is about the feeling a musician has many mornings coming out of a club, where it’s dark in the streets, all quiet and empty. It’s peaceful and there is a certain level of expectations, of positiveness of what the day is going to be about. The day is rising, the dynamics are slowly building. Musically there is an interplay between the rhythmic structure and the vocals and some typical Motown arrangements. Throughout there is an emphasis on the saxophone, a rock-pop beat, with the drum recorded in a live atmosphere.