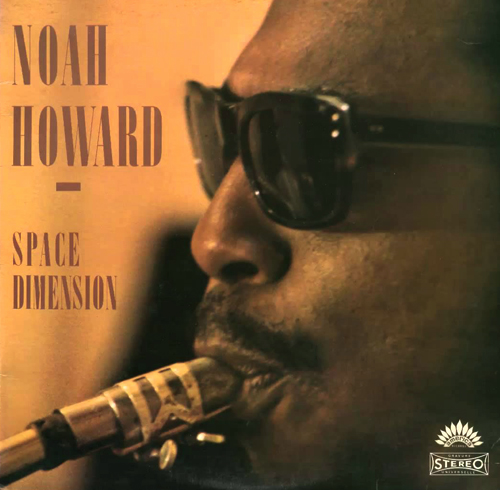 Tracks Listing Side A

Tracks Listing Side B

Noah Howard was born in 1943 in New Orleans and, like many of his contemporaries, first played music in church as a child. In his 2010 book, ‘Music in My Soul’, Howard reflected upon his childhood in New Orleans and the influence the city had on him: “Growing up in New Orleans was like receiving a steady diet of music, and my taste in music became increasingly more sophisticated. In the neighborhood where I grew up kids around me were listening to Rhythm and Blues and Jazz; Rock came only much later. One of the great moments of my life was when I was around 13 years old and heard Duke Ellington with Paul Gonsalves playing a twenty-some minutes chorus solo on tenor sax at Newport. We had never heard anything like this before; a saxophone player doing so many choruses, this was years before Coltrane opened up. That experience meant there was no turning back; my ears were open and my desire was burning for music.”
He first learned to play the trumpet before moving on to alto, tenor and soprano saxophone. And his musical journey initially took him to Los Angeles where he worked with Dewey Johnson and then later moved to New York to join the Sun Ra Arkestra. Like most forward thinking saxophonists of the time, Howard was influenced by the evolving expressionism of John Coltrane and Albert Ayler and it wasn’t long before he became a key member of the mid-60s free jazz movement, a stepping stone to his elevation into one of the world’s most notable saxophonists.
Howard’s debut LP as leader, ‘Noah Howard Quartet’ was recorded in 1965, and the follow up, ‘Noah Howard at Judson Hall’, in 1966 but not issued until 1968, both for the groundbreaking ESP Records label (incidentally, both albums featured British trumpeter Ric Colbeck). However, Howard’s view of ESP was not positive, calling it “ a monster of deception… I am aware of ESP’s adventures…they continue to make money off the artists and they refuse to pay any royalties.”

Like many of the black jazz musicians of the 60s, Howard left the USA and settled in Europe (making the permanent move to Paris in 1972). In an interview in 2005, Howard explained his move: “When I first came to Europe it was 1969 and I came to play in a big festival and after that we had a lot of concerts, recalls Howard. “Then we left and we came back to the States, I was based in New York at that time. About six months later, we had some more concerts, we came back and this went on for years, going back and forth and back and forth and back and forth… I decided that instead of going back and forth all the time, it was more advantageous for me to stay over here and live and work.”
It was in Paris that Howard took part in sessions for the Frank Wright albums ‘One For John’, cut for the leading French free jazz label BYG Actuel and another Wight session, ‘Uhuru Na Umoja’, for the America label. Another album on America that featured Howard was Archie Shepp’s ‘Black Gipsy’. This session also featured , among others, Sunny Murray on drums and Clifford Thornton on trumpet.
America Records was to be home to Howard’s third album, ‘Space Dimension’. On this album, Frank Wright was reunited with Howard once more, and Wright also composed one track, ‘Church Number Nine’ (Wright would also do his own version as the title track on his 1970 album, initially only released in Japan. That album would also feature Howard.) ‘Space Dimension’ also features bop drummer Art Taylor on three tracks, with Muhammed Ali (brother of Rashid), on one. They’re joined by alongside pianist Bobby Few, longtime member of Frank Wright’s group and an alumnus of Archie Shepp’s band.
‘Space Dimension’ has never seen an official reissue since its original release in 1970 and remains, among a few aficionados, one of the most in demand – and little known – albums in Howard’s discography. The blend of free improvisation with a tough rhythmic foundation make for an edifying listening experience. The spectral disjointed afro-blues of the title track, with Howard’s soaring, searing horn, introduces an exceptional album of weight and significance, a real statement piece. ‘Viva Black’ starts as a lush groove, rich with texture and tone. Bobby Few’s piano is sparse and disciplined, allowing space for the interweaving angles of the horns and drums to cross and jostle and build in intensity, with Muhammad Ali’s drum solo acting as a cathartic release.
‘Song for Poets’ is blistering in its attack, an intense assault from the whole group – urgent and imperative, a call to action that seemed to resonate with the tumult of the late 60s and early 70s and, perhaps, still resonates now. The album closes with the extended piece ‘Blues for Thelma’. It starts like a sort of angular, shattered New Orleans first line march band; Howard visceral horn and Few’s piano joust and punch like fighters in a ring; Ali’s drums hammer a solid undertow of power and energy, relentless in its fire.
All in all, ‘Space Dimension’ announced Howard’s arrival into a new decade, a decade that was to see not just jazz but music and wider society undergo profound change.
Howard’s third record was the widely acclaimed ‘Black Ark’, which featured Arthur Doyle on his first recording. ‘Black Ark’ soon became a landmark free jazz recording and elevated Howard into the first division of globally renowned free jazz players.

He spent much of the next decade or so exploring new ideas and places to work, including Europe and Africa, moving to Nairobi in 1982 and finally Brussels, where he had a studio and ran a jazz club.
In his autobiography, Howard described going to Africa: “It was a Sunday morning with bright blue skies and I reached down and grabbed a handful of earth, holding it in my hands. It was red earth. As the first of my family to make this voyage back to my community, I was filled with emotion and started to cry – thinking about all those before me who didn’t survive the middle passage and slave trade. I thanked the few strong survivors of which I’m a descendant and was grateful to be a live and to make it back to Africa in my lifetime. The feeling of coming back home, after generations had gone through abuse and suffering, was upon me. I would put some of this into music later on when recording with James Emmanuel, the poet on ‘Middle Passage’”
He recorded steadily through the 1970s and 1980s, mostly with his own label AltSax and continued to expand his repertoire, exploring a range of sounds from ethno-funk to world music in his latter decade. He returned to his free jazz roots in the 90s, mixing the myriad of influences and styles he had encountered throughout his journey.
Noah Howard recorded 35 albums, and their styles reflect the ceaseless musical searcher he was: blues, free jazz, world music. He covered it all.
Noah Howard died on September 3rd, 2010 while on holiday in the South of France. He died a day before finishing the first draft of his autobiography.